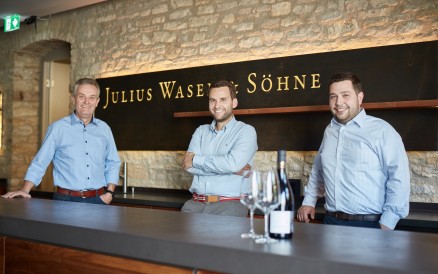 The winery "Julius Wasem & Söhne" is located in the community of Ingelheim (Bingen area) in the German wine growing region of Rheinhessen. The Wasem family first demonstrably engaged in winegrowing as...
More

Weingut Wasem, Ingelheim is a premium member of wein.plus and thus supports this wine guide. Thank you!

Set a new bookmark for the wines of Weingut Wasem. The currently tasted wines then appear on your personal Wine Reviews homepage.

The winery "Julius Wasem & Söhne" is located in the community of Ingelheim (Bingen area) in the German wine growing region of Rheinhessen. The Wasem family first demonstrably engaged in winegrowing as early as 1726. In the 17th century, the farm buildings were home to the noble family of Knight Hundt von Saulheim and his wife Katharina, née von Rodenstein. The foundation stone for today's business was laid in 1912 by Julius Wasem (1894-1972), who set up the winery in the old aristocratic seat in Ober-Ingelheim and was the first producer to bottle and market his wines himself. Among other things, he was a member of the board of the German Winegrowers' Association and co-founder of the German Wine Seal for Rhinehesse. In 1963 he handed over the farm to his sons Gerhard and Jochen. Today it is managed in the third generation by their sons Holger and Burkhard Wasem. A wine tavern and a wine hotel are attached, which are managed by their wives Ilona and Karin Wasem.