The estate in the Lower Austrian wine-growing region of Kremstal has its origins in 1083, when Bishop Altmann of Passau (1015-1091) founded a monastery at the summit of the Göttweiger Berg at 449 m ab...
More

Set a new bookmark for the wines of Weingut Stift Göttweig. The currently tasted wines then appear on your personal Wine Reviews homepage.

The estate in the Lower Austrian wine-growing region of Kremstal has its origins in 1083, when Bishop Altmann of Passau (1015-1091) founded a monastery at the summit of the Göttweiger Berg at 449 m above sea level on the southern bank of the Danube opposite the city of Krems, which he handed over to the monks of the Benedictine order. Since then, forestry and viticulture have formed the economic basis, and it was here that the development of viticulture was decisively influenced for the region. In the 14th century there was a distinct wine culture. The Hofmeister controlled the carefully established working methods in viticulture. Exact completion dates were set for the individual tasks, the number of vines, fertilisation, the timing of pruning and weeding. In the 16th century the wines of the monastery were known far beyond the borders of Austria in many countries. The main customers were Bavarian monasteries. The island of Wörth near Mautern served as a transshipment point, from where the wine was shipped in wooden barrels by wooden barges on the Danube. These were pulled upstream by horses, downstream they went with the current. 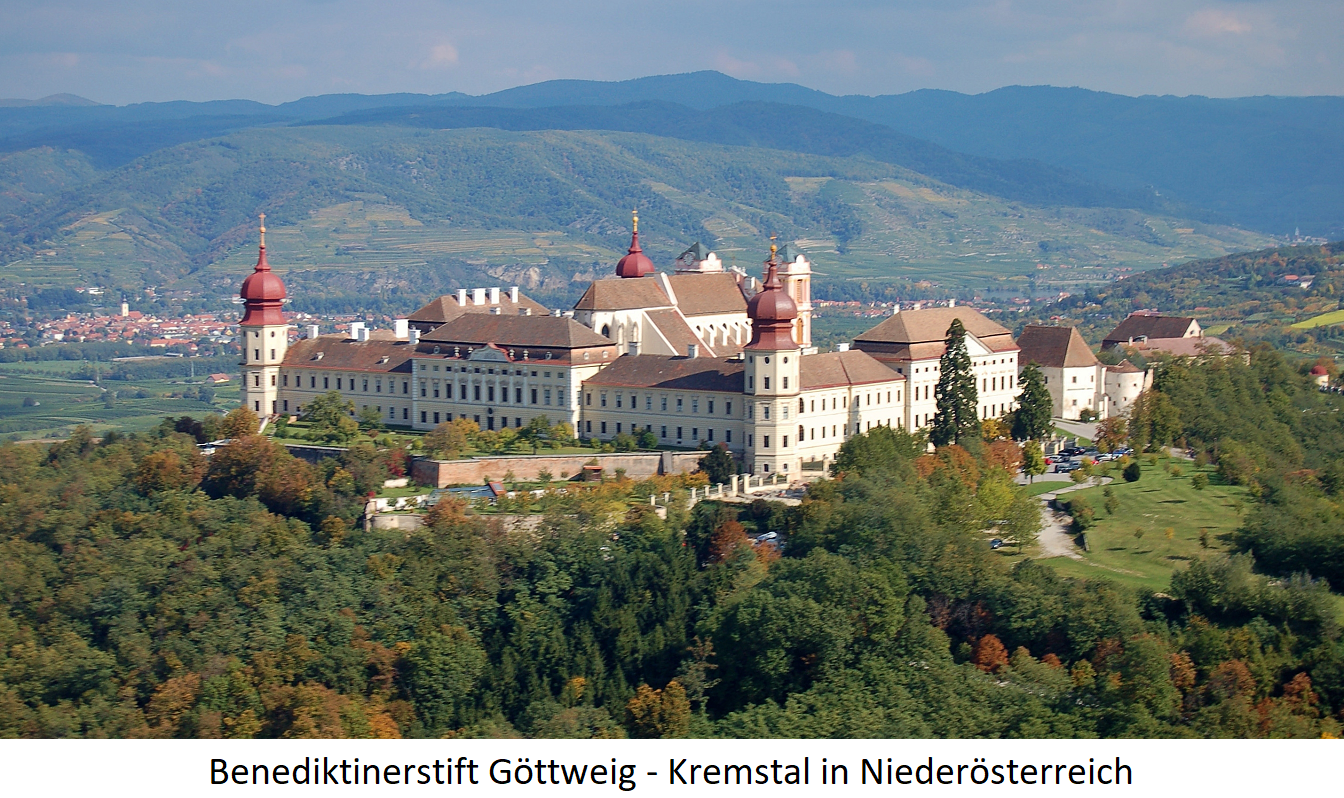 As early as 1714, the Göttweig Abbey had 20,440 buckets (1,144,640 litres) of wine in stock, as documented by documents. The largest oak barrel owned by the monastery had room for 646 buckets (36,176 litres) of wine. The annual income from the wine business was so high that after a major fire in 1718, the famous architect Lukas von Hildebrand (1668-1745) was commissioned with the construction of the new monastery building, whereby the construction costs were financed almost entirely from the income from the wine business (since 2000, the world-famous baroque monastery has been declared a UNESCO World Heritage Site). Since Göttweig Abbey had the sovereign privilege of serving wine, many taverns were opened, for example in Stein, Vienna (here you can still find the "Göttweiger Stiftskeller" in the city centre) and Hungary. In 1730 the first bottling took place, the bottles had the shape of a glass balloon. In this time a planned cellar economy also developed in the monastery. In 1805 Emperor Napoleon (1769-1821) visited the monastery before the occupation of Vienna and was delighted with the unique view up there and the wine enjoyed there.

Since the year 2006, the vineyards that have long been leased to the Dr. Unger Winery have been leased by a group of shareholders, thus reviving the winery. The responsible managing director is Fritz Miesbauer (also a shareholder and manager of Weingut Stadt Krems), supported by Peter Rethaller (cellar master) and Franz-Josef Gansberger (distribution/sales). 26 hectares of vineyards are planted in the areas Gottschelle, Göttweiger Berg and Silberbichl. About 95% of the vineyards are planted with the white wine varieties Grüner Veltliner (60%), Riesling and Chardonnay, and the rest with the red wine varietyPinot Noir. The grapes are hand-picked and transported in crates for processing to Weingut Stadt Krems, where the entire cellar work is done. The wines are principally matured in steel tanks. Among the premium wines are Rieslings and Grüner Veltliner and Kremstal DAC Reserve with different vineyard names. We also produce fair wines in white and red. About 120.000 bottles of wine are produced annually. The winery is a member of the Association of Traditional Austrian Wine Estates.

Weingut Stift Göttweig Region: Kremstal Lower Austria/Niederösterreich Austria
One of the best producers of the country
Bookmark
This feature is available for Members only!
Become a Premium Member Today