Set a new bookmark for the wines of Weingut Drautz-Able. The currently tasted wines then appear on your personal Wine Reviews homepage.
Only Members can bookmark

About Producer Weingut Drautz-Able, Heilbronn is a premium member of wein.plus 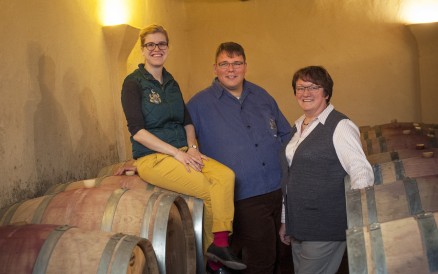 The winery is located in the municipality of Heilbronn in the German wine-growing region of Württemberg. It was founded in 1496 on the outskirts of Heilbronn by Jodokus Drautz. He received the right t...
More

The winery is located in the municipality of Heilbronn in the German wine-growing region of Württemberg. It was founded in 1496 on the outskirts of Heilbronn by Jodokus Drautz. He received the right to seal with the family coat of arms of the two grapes by imperial edict. The double name was created in 1960 by the marriage of Christel Drautz and Martin Able. Today, the winery is managed by Monika Drautz and her son Markus Drautz. The cellar management and external operations were moved to the vineyards, where a newly built modern winery was put into operation in 1983. The vineyards cover almost 17 hectares in the single vineyard sites Stiftsberg and Wartberg (Heilbronn), Scheuerberg (Neckarsulm), and Katzenbeisser (Lauffen). Two thirds of the vineyards are planted with the red wine varieties Trollinger, Lemberger, Pinot Noir, Black Riesling, Samtrot, Merlot, Dornfelder, Regent and Cabernet Sauvignon, and one third with the white wine varieties Riesling, Pinot Blanc, Sauvignon Blanc, Pinot Gris, Kerner, Müller-Thurgau, Silvaner and Gewürztraminer. Barrique ageing in exclusively French oak barrels has been practised since 1986, making it one of the earliest pioneers. The dry wines made from Riesling and Pinot Noir from the VDP-classified vineyards are marketed as Grosses Gewächs. Since the 2004 vintage, 90% of the wines have been bottled with the Stelvin screw cap. Bottle-fermented sparkling wines and brandies are also produced. The winery has been a member of the VDP (Association of German Prädikat Wine Estates) since 1994, as well as a founding member of the HADES group and the German Barrique Forum
Weingut Drautz-Able Region: Germany Württemberg
One of the best producers of the country
wein.plus Business Premium Member
In this section you will find
currently 149,853 Wines and 23,352 Producers, including 2,182 classified producers.
Rating system Their sources in Wine Guide Tasting samples
Bookmark