Where to buy wines of Weingut Donatsch?

Set a new bookmark for the wines of Weingut Donatsch. The currently tasted wines then appear on your personal Wine Reviews homepage.
Only Members can bookmark 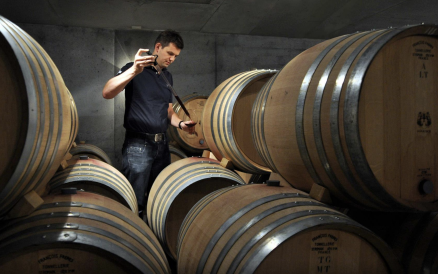 The winery is located in the municipality of Malans in the Bündner Herrschaft in the canton of Graubünden in the wine region of Deutschschweiz. In 1897, Peter Donatsch acquired the "zum Ochsen" inn an...
More

0.75 L
2019 AOC Graubünden Completer "Malanserrebe"
92 WP - excellent What our ratings mean
70.00 €
Editor note: Vegetal, yeasty and nutty scent with calm yellow fruity and a little buttery aromas as well as chalk...
Reviewed: 24 December, 2020
More
Where can you buy this wine?

The winery is located in the municipality of Malans in the Bündner Herrschaft in the canton of Graubünden in the wine region of German-speaking Switzerland. In 1897, Peter Donatsch acquired the "zum Ochsen" inn and the associated winegrowing business. His great-grandson Thomas Donatsch did pioneering work in the 1970s and planted the Burgundian varieties Chardonnay and Pinot Blanc as early as 1975, as well as Cabernet Sauvignon from the Bordelais in 1983. He was the first to press a Crémant in Switzerland using the champagne method and to experiment with barrique ageing. In 1973, the then cellar master of the Domaine de la Romanée-Conti André Noblet gave his friend Thomas three used La Tâche barrels in which the first "Herrschäftler" was vinified according to the classic Burgundy method. Today, the winery is run by Heidi and Thomas Donatsch, and the fifth generation, Martin, is responsible for viticulture. After completing his training as a winemaker, Martin gained practical experience at well-known wineries in Australia, South Africa, Spain and Bordeaux.

The vineyards cover six hectares of vines in the Bovel, Frassa, Halde, Michel, Selvenen and Spiger sites. The white wine varieties Chardonnay, Pinot Blanc and the ancient Malanser Completer, reactivated and further developed by the winery, as well as Pinot Noir are cultivated on the terroir best suited to them. The near-natural cultivation is carried out according to the certified rules of the ÖLN (ecological performance certificate). This includes cover crop, purely biological fertilisation, ecological plant protection with reduced use of fungicides and no herbicides and insecticides.

The company motto is: Good wines can be made in the cellar, but great wines grow in the vineyard. The cellars are divided into a barrique cellar and seven centuries-old vaulted cellars. The grapes from the different vineyards are vinified separately according to the type of vineyard. The white wines are fermented in barrique barrels and then matured on the fine lees. The red wines mature in Burgundian pièce barrels. The classic Pinot Noir named "Tradition" is matured in used barrels, the Pinot Noir from the over 1000-year-old Malans top vineyard "Spiger" is matured in new barrels to a third, and the "Unique", vinified from the best grapes, is matured exclusively in new barrels. The Grand Crus from Burgundy serve as a model for this. Almost 80% of the production goes to renowned Swiss restaurants and hotels, whose chefs personally collect the wines from the winery. Many private customers also taste and buy the wines on site.

Other Businesses of this Producer