Set a new bookmark for the wines of Weingut Deutzerhof. The currently tasted wines then appear on your personal Wine Reviews homepage.
Only Members can bookmark 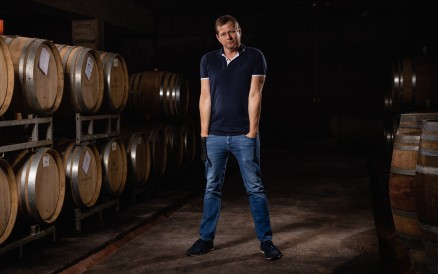 The "Deutzerhof Cossmann-Hehle" winery is located in the municipality of Mayschoß in the German wine-growing region of Ahr. The origins of the traditional farm date back to the 16th century, as Caspar...
More

The "Deutzerhof Cossmann-Hehle" winery is located in the municipality of Mayschoß in the German wine-growing region of Ahr. The origins of the traditional farm date back to the 16th century, as Caspar Cossmann and his wife Catharina were mentioned as winegrowers as early as 1574. In 1952, Alfred Cossmann decided to market his wines himself, which were then produced on 2.5 hectares. In 1977, his daughter Hella married the tax expert Wolfgang Hehle, who, as a career changer, took a liking to the work of the winegrower and continuously developed the winery. In 1980, a new winery - Der Deutzerhof - was built on the Deutzerwiese, as the main house no longer offered enough space for processing the grapes and ageing the wines. Wolfgang Hehle changed not only the name, but primarily the style of the winery. In the vineyard, the work was more nature-friendly and the number of grapes on the vine was limited. In the cellar, Wolfgang Hehle relied on controlled, gentle spontaneous fermentation and a combination of large and small wooden barrels.

After the death of Wolfgang Hehle, the winery has been run by his wife Hella and cellar master Hans-Jörg Lüchau since April 2013. After Hella Hehle retired from the winery in 2019, the business was handed over to Jürgen Doetsch, a long-time friend of the family, in 2020. The business will continue under the new owner with Hans-Jörg Lüchau, with viticultural technician Christoph Hoffmann on the outside and the small Deutzerhof team. In 2020, new investments were made in viticultural machinery for even more natural viticulture and in cellar technology. In 2021, a new vinotheque was built, which also serves as a meeting zone for visitors to enjoy Ahr wines.

The vineyards cover seven 6.4 vineyards, 5.3 of which are self-owned. They are small, steeply terraced plots with poor soils, so that the vines are forced to penetrate deep into the earth. Many of the vineyard walls that were in danger of collapsing or had already collapsed were restored and the small terraces were rebuilt. The work in the extremely steep Eck site in Altenahr is facilitated by a rack-and-pinion railway. The vineyards are widely scattered in the single vineyard sites of Daubhaus (Ahrweiler), Eck (Altenahr), Schieferlay (Dernau), Landskrone (Heimersheim), Lacherberg and Mönchberg (Mayschoß), Kirchtürmchen and Schieferlay (Neuenahr), and Herrenberg (Rech).

They are planted with the red wine varieties Pinot Noir, Frühburgunder, Dornfelder and Blauer Portugieser, as well as with the white wine varieties Riesling and Chardonnay. A special feature are ungrafted, very old vines. The Riesling vines are more than half a century old, the Portugieser vines date back to the 1920s. The typical small-grape Pinot Noir variety called "Kaasten", which has been known in the Ahr for centuries, is also cultivated by the Deutzerhof. The vineyards are cultivated in an environmentally oriented manner with cover crop, yield restriction and late harvesting of physiologically fully ripe grapes. The influence of the barriques is carefully used according to the quality levels. A speciality are also noble sweet Beerenauslesen, Trockenbeerenauslesen and ice wines from Riesling. Around 35,000 bottles of wine are produced annually. The winery has been a member of the VDP and the German Barrique Forum Association since 1994.