Set a new bookmark for the wines of Tenuta San Guido. The currently tasted wines then appear on your personal Wine Reviews homepage.
Only Members can bookmark

Where to buy wines of Tenuta San Guido?

About Producer Tenuta San Guido, Bolgheri is a premium member of wein.plus 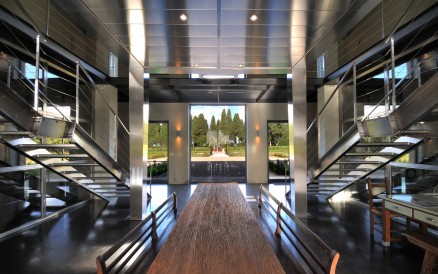 It is very rare (except in Bordeaux) for a wine name to be synonymous with the producer and for the name of the winery to be rather unknown. One example is "Tenuta San Guido". The estate is located te...
More

It is very rare (except in Bordeaux) for a wine name to be synonymous with the producer and for the name of the winery to be rather unknown. One example is "Tenuta San Guido". The estate is located ten kilometres from the coast near the municipality of Bolgheri south of Livorno in the Italian region of Tuscany. It was settled by the marquis Mario Incisa della Rochetta (1899-1983), a member of an ancient noble family dating back to the Roman Empire. He was hereditary, as his grandfather Leopoldo Incisa had written a bibliography of the most important Italian and international grape varieties of the time.

Even as a young student of agriculture in Pisa, the Marchese had dreamed of making a "noble wine", the benchmark or model for him was Bordeaux. Therefore he began to experiment with French grape varieties. Cabernet Sauvignon was planted on a stony slope below the Castiglioncello Castle in 1944. At that time, it was outside of all recognized growing areas. A first wine was produced in 1948, but the vintages up to 1960 were only drunk on the estate. A few cases of each vintage were stored. Through regular sampling, the Marchese discovered that the wines were getting better and better.

In 1965 two more vineyards were planted with Cabernet Sauvignon and Cabernet Franc. It was only at the insistence of his son Nicolò and his famous nephew Piero Antinori, a member of the already legendary winegrowing family from Florence, that the Marchese was persuaded to market the wine. Originally only 1.6 hectares, the vineyard was extended to over 30 hectares under the management of Nicolò Incisa della Rocchetta. The annual production is around 200,000 bottles. The vineyard is divided into four plots, the best ones being Sassicaia, Aia Nuova and Quercione at 100 metres and Castiglioncello at 350 metres above sea level. Sassicaia in particular is characterised by a particular type of soil. 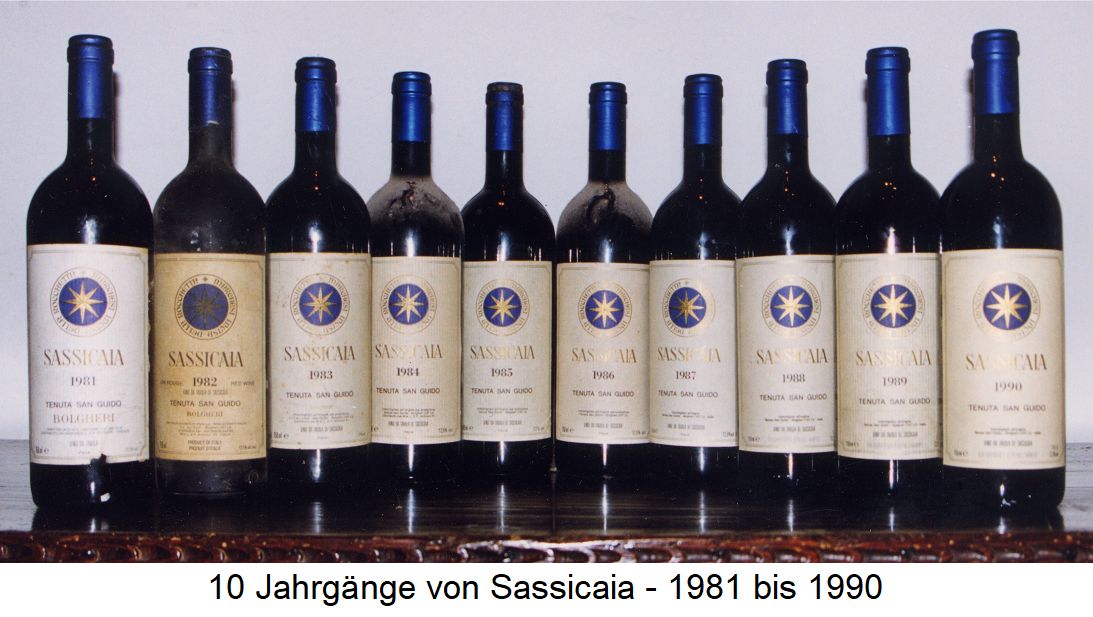 The first red wine, named "Sassicaia" after the many stones (Sassi) in the vineyards, was sold in 1968. The varietal wine made from Cabernet Sauvignon with a little Cabernet Franc, which was untypical for Italy at that time, immediately attracted international attention and quickly became a cult wine. For many years, however, it was only allowed to be marketed as a VdT (table wine) because the two French varieties were not approved for DOC wines. Along with the Tignanello, it was one of the very first representatives of the wines subsequently named Super-Tuscan. Later, temperature-controlled fermentation in steel tanks and ageing in French barriques were introduced. The wine was first bottled and marketed by Piero Antinori. After the death of his father, Niccolò Incisa della Rochetta moved bottling to Bolgheri in the 1980s.

Finally, in 1994, a red wine was admitted to the Bolgheri DOC area, to which the Sassicaia, along with the Ornellaia, has contributed significantly. Today, Bolgheri Sassicaia, which is actually the full name, is a completely independent DOC area, for which the DOCG classification is almost certainly to be expected in the near future. It is considered one of the very best red wines in Italy and is at least equal to Barolo, Brunello di Montalcino or Vino Nobile di Montepulciano, which have been debalted for a long time.