Set a new bookmark for the wines of Pétrus. The currently tasted wines then appear on your personal Wine Reviews homepage.
Only Members can bookmark

About Producer Pétrus, Pomerol is not a Premium Member of wein.plus yet

The winery is located in the heart of the municipality of Pomerol in the area of the same nameBordeaux). In the winery there is a small stone figure of the eponymous apostle. Although it won a gold me...
More

The winery is located in the heart of the municipality of Pomerol in the area of the same name(Bordeaux). In the winery there is a small stone figure of the eponymous apostle. Although it won a gold medal at the 1878 World Exhibition in Paris, the winery was not well known internationally for a long time. This changed abruptly with the 1945 vintage, which is regarded as the wine of the century (see a bottle in the picture). In 1925, the estate became partly owned by Marie Louise Loubat (+1961) and was fully acquired by her in 1949. At that time, the vineyard comprised 6.5 hectares of Merlot (70%) and Cabernet Franc (30%). In that year, Jean-Pierre Moueix (1882-1957) took over the exclusive distribution of the wine. After the death of the owner in 1961, Moueix acquired one third of the shares, the other two inherited by Lily Lacoste (niece of Madame Loubat). In 1964, Moueix acquired further shares to make two thirds of the company. After the death of Jean-Pierre Moueix, his son Jean-François (*1945) took over the management in 2003. His brother Christian (*1946) is in charge of production. 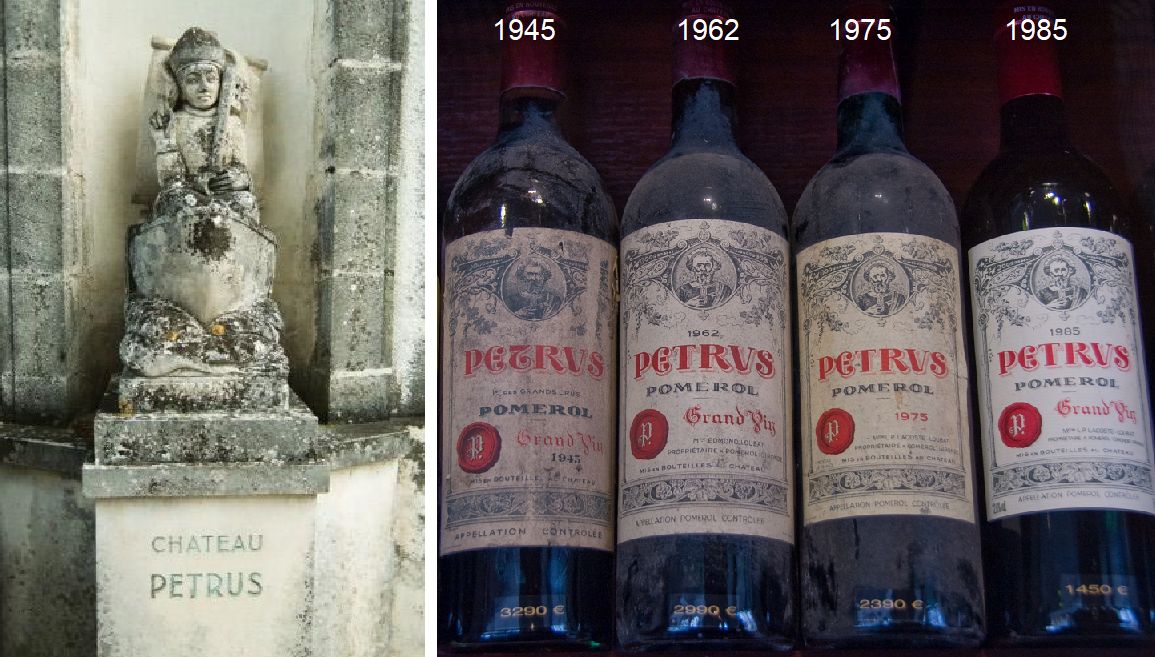 In 1969, the vineyards were expanded to a total of 11.5 hectares of vines by the purchase of 5 hectares of the neighbouring Château Gazin. The grape varieties were changed to 95% Merlot and 5% Cabernet Franc. This red wine is one of the best and most expensive wines in Bordeaux and also in the world. The 2000 vintage cost between € 3,500 and € 3,800 in 2010 (after ten years it should be opened at the earliest). The well-known wine journalist Hugh Johnson commented: "Incomparable - but unfortunately only for millionaires". There is no Grand Cru classification of its own in the Pomerol, but it is undisputedly the top wine and at least equal to the five Premier Cru Classé in the Médoc. Today, the label only says "Petrus", but old labels do still show "Château Pétrus" (by the way, there is no château = castle). Even in good years no more than about 4,000 cases (~50,000 bottles) are produced.

The gravelly sand-loam soil on a bed of ferrous earth with particularly good water drainage creates excellent conditions. This is ideal for Merlot, from which the wine is made 100% in most vintages. Another criterion is the vines, some of which are up to 70 years old. And a third point is the extreme yield restriction. During winter pruning, only eight eyes are left on each vine (even two more would increase the yield by a quarter). In summer, a further restriction is made by rigorous thinning out to about half. Particular attention is paid to the harvest. A total of 180 harvest helpers are on call. The start is when the grapes have reached the ideal physiological ripeness. It is not started until the afternoon, so that the dew (which could dilute the must) has already evaporated. The harvest is carried out in several passes of the ripe grapes. Unripe and unhealthy grapes are mercilessly rejected. If necessary, unusual methods are also used. When it rained once before the harvest, a low-flying helicopter was used to dry the vines.

In the mid-1990s, the winery made the headlines in the wine-oriented trade press when the famous wine author couple David Peppercorn and Serena Sutcliffe doubted the authenticity of Imperial bottles of the Château Pétrus vintages 1921, 1924, 1926, 1928 and 1934 from the possession of the well-known collector Hardy Rodenstock (1941-2018), which were offered for sale. The suspicion was never proven, but it was not disproved either, because the winery has no production records of these vintages.