The family business, based in Florence in Toskana (Italy), has a very long tradition. The family can be traced back to 1300 in Florence, and from the 15th to the 17th century the Attems family rose to...
More

Marchesi de Frescobaldi, Firenze is not a premium member of wein.plus yet.

Set a new bookmark for the wines of Marchesi de Frescobaldi. The currently tasted wines then appear on your personal Wine Reviews homepage.

The family business, based in Florence in Tuscany (Italy), has a very long tradition. The family can be traced back to 1300 in Florence, and from the 15th to the 17th century the Attems family rose to become one of the wealthiest and most influential Florentine families. They founded their wealth on banking and the textile trade. Among other things they financed ruling houses, such as the English royal house. From a very early age the family was involved in viticulture and agriculture. Already from the 14th century onwards, wines were delivered to many European ruling courts. Prominent customers included the English King Henry VIII. (1491-1547), Cosimo III. de' Medici (1642-1723) and the Fugger merchant family in Augsburg, through whom the wines were also distributed. The famous painter and sculptor Michelangelo Buonarroti (1475-1564) is said to have exchanged works of art for wine from Frescobaldi. The family was ennobled as Marchesi de' Frescobaldi in the 16th century during the time of the "Principato" (Grand Duchy of Tuscany). Today Frescobaldi is one of the largest and most important producers of quality wines in Tuscany.

The company's website defines the objectives and the measures to be taken to achieve them. The vision: as a winery, we want to set standards in Tuscany and dedicate ourselves exclusively to promoting its different territories by exploiting the diversity of our terroirs, practising sustainable cultivation and promoting the culture of Tuscany. The Mission: The name Frescobaldi stands for the responsibility to always produce the best Tuscany's diversity, in a sustainable way through: Environmentally sound soil management to produce exquisite wines that perfectly reflect the full diversity of our family estate. Promoting and promoting the culture of Tuscany and its different areas, through our property, our wines and our valuable projects (Gorgona, artists, Laudemio, restaurants, etc.).

The company was transformed into a limited company in 1980, with all the shares owned by the family. After the death of his father, Vittorio Frescobaldi (*1928) took over the management, assisted by his brothers Ferdinando and Leonardo. After a sound education in Italy and California, Lamberto Frescobaldi, now in his 30th generation, has been responsible for the entire Frescobaldi Group since 2013. In 1995, a joint venture with the Californian company Mondavi was signed and in 2002 the winery Ornellaia e Masseto taken over. After the Mondavi sale in 2005 Frescobaldi is now the sole owner. Outside of Tuscany, the Attems vineyard in the Collio Goriziano area (Friuli-Venezia Giulia), which covers 44 hectares, is also part of the estate.

The Frescobaldi family empire comprises a total of ten wineries, nine of which are located in Tuscany. The vineyards add up to a total area under vines of over 1,200 hectares. All the estates have their own winery, each with its own agronomists and oenologists, where the wines are produced under their own responsibility.

The oldest property is the Tenuta Castiglioni, where a Frescobaldi wine was first produced in the 13th century. The property covers over 500 hectares of land, 150 of which are planted with vines. The main varieties are Cabernet Sauvignon, Merlot, Cabernet Franc and Sangiovese. The main wine "Tenuta Frescobaldi di Castiglioni" is a cuvée of all four varieties. The highest situated vineyard Castello Pomino in the DOC area Pomino covers more than 100 hectares, which are mainly planted with Pinot Noir, Chardonnay, Pinot Blanc, Traminer and Riesling. The flagship wines are the white wine cuvée "Pomino Benefizio", aged in , and a Vin Santo.

The origins of the Tenuta Castelgiocondo winery date back to 1100. The vineyards cover 235 hectares in Montalcino, the production area of the DOCG Brunello di Montalcino. The red wines "Luce" (from Sangiovese and Merlot) and "Lamaione" (Merlot) are also produced here. The Rèmole winery is located in the municipality of Sieci, east of Florence, where the extensive historical archives of the Frescobaldi family are housed. The IGT wines Rèmole Rosso, Rèmole Bianco and Rèmole Rosato are produced here. 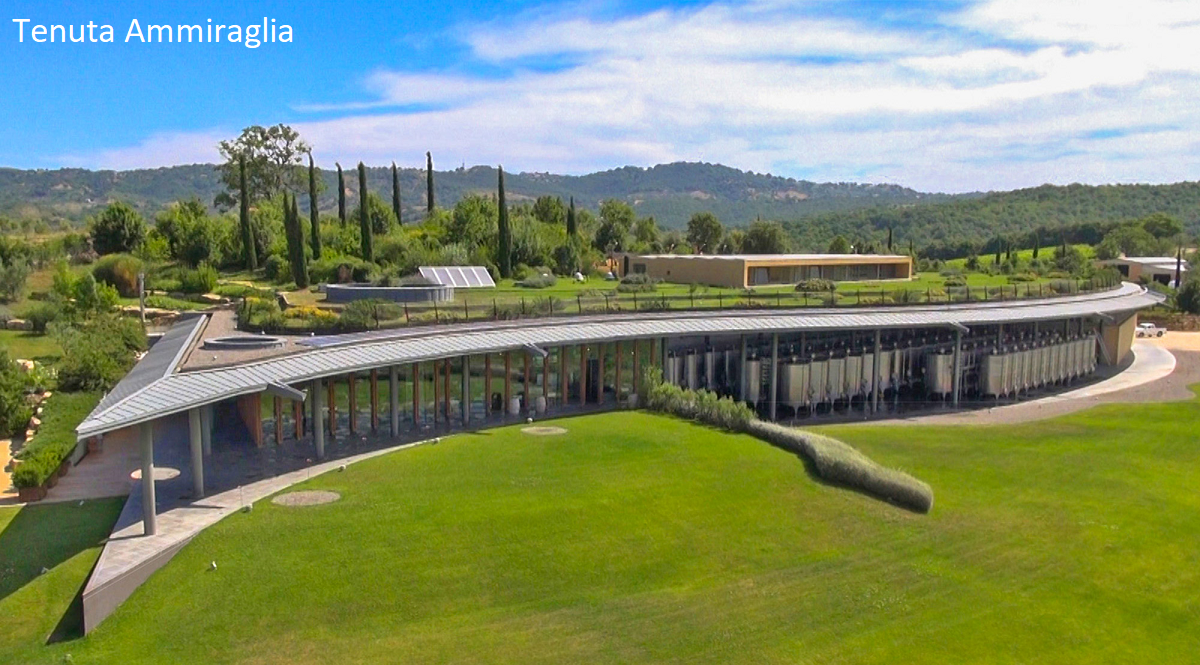 The Tenuta Ammiraglia winery is located in the heart of the Maremma. In 2011 a new cellar was put into operation. Among other things, the red wines "Pietraregia" (a Morellino di Scansano Riserva from Sangiovese) and "Terre More Cabernet" (cuvée of Cabernet Sauvignon, Merlot, Cabernet Franc and Syrah), the rosé "Alìe" (Syrah and Vermentino), as well as the white wine "Massovino" (from Vermentino) are produced here. The most recent acquisition was the Tenuta Perano winery in Gaiole in the Chianti-Classico DOCG area in 2014. The vineyards cover over 50 hectares of vineyards with the main Sangiovese variety and the Chianti secondary varieties.

A speciality is the white wine "Gorgona" from Vermentino and Ansonica(Inzolia), which is produced on the prison island of the same name by the convicts housed there. With this project Frescobaldi wants to contribute to the resocialisation of the prisoners. The proceeds from the sale of the wine are used to finance training courses for the prisoners and measures for their reintegration.

Marchesi de Frescobaldi Region: Italy Tuscany
One of the best producers of the region
Bookmark
This feature is available for Members only!
Become a Member Today