The "Hessische Staatsweingüter GmbH Kloster Eberbach", with its headquarters in the former Cistercian abbey Eberbach in the German Rheingau wine region, is the largest winery in Germany with about 220...
More

Ask producer about this Wine

Hessische Staatsweingüter GmbH Kloster Eberbach, Eltville is a premium member of wein.plus and thus supports this wine guide. Thank you!

Set a new bookmark for the wines of Hessische Staatsweingüter GmbH Kloster Eberbach. The currently tasted wines then appear on your personal Wine Reviews homepage.

The "Hessische Staatsweingüter GmbH Kloster Eberbach", with its headquarters in the former Cistercian abbey Eberbach in the German Rheingau wine region, is the largest winery in Germany with about 220 hectares of vineyards. The majority of the vineyards date back to the 12th century, when the Cistercians founded the famous Eberbach Monastery here. At the heyday of the abbey, its possessions covered almost 10,000 hectares, stretching from Worms to Cologne. These included areas along the Bergstrasse, which were cultivated via a manor house that was directly under the control of Eberbach Abbey. In 1803 under Napoleon (1769-1821) the monastery property was secularised. The Duke of Nassau-Usingen became the new owner, from 1866 the Kingdom of Prussia and since 1946 the State of Hesse. The well-known wine author Dr. Hans Ambrosi (1925-1912) was head of the business from 1966 to 1990. Today's managing director is Dieter Greiner. In the rooms of the monastery, festive events such as the annual auctions take place today. The winery has three domains, each with its own wine cellar for maturing the wines. 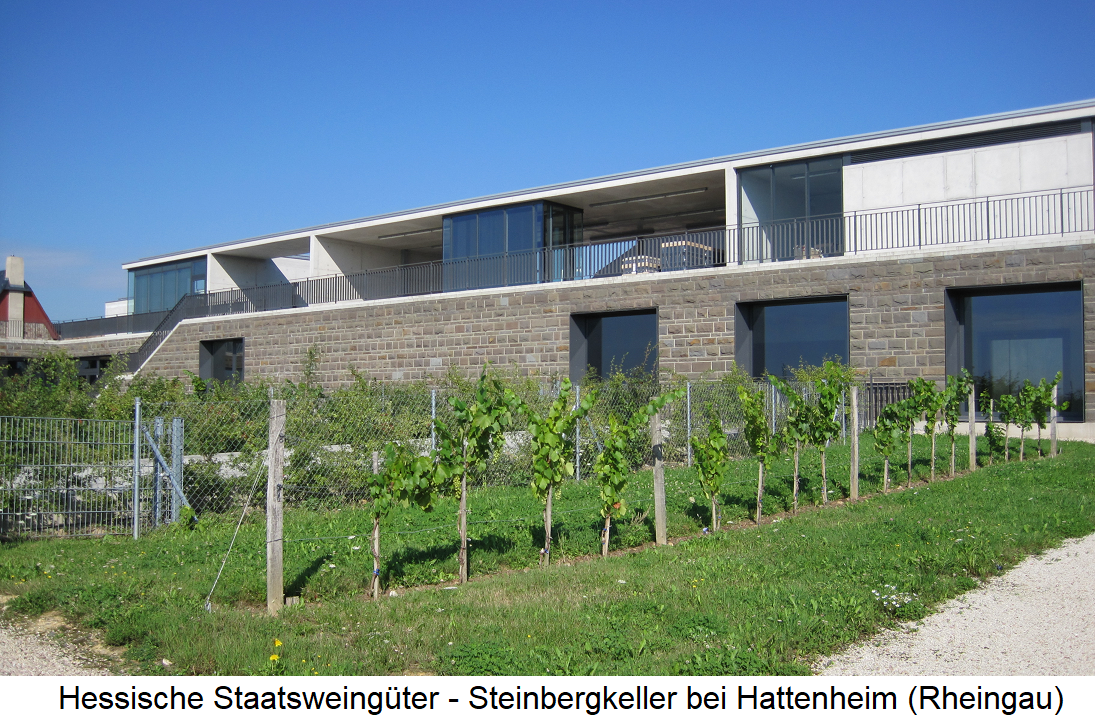 The Bergstrasse domain is the only one in the Hessische Bergstrasse growing area. The vineyards of this estate, founded in 1904 by the Grand Duke of Hesse-Darmstadt, comprise 38 hectares in the individual locations Kalkgasse (Bensheim), Centgericht and Steinkopf (Heppenheim), as well as Herrnwingert (Schönberg). Mainly Riesling is cultivated, as well as smaller areas of Pinot Noir, Pinot Blanc and Pinot Gris.

The red wine domain Assmannshausen in the Rheingau comprises 17 hectares in the Höllenberg vineyard and 18 hectares in the Rüdesheimer Berg, which are exclusively planted with Pinot Noir. The Riesling grapes from the Rheingau vineyards cover 147 hectares. These are brought into the Steinberg cellar of the Steinberg domain, which was opened in 2008. A large part of the Rheingau sites are classified as first vineyard sites. The best known are Berg Rottland, Berg Roseneck and Berg Schlossberg (Rüdesheim), Steinberg (near Hattenheim), Marcobrunn (Erbach), Baiken and Gehrn (Rauenthal), Neroberg (Wiesbaden), and Domdechaney and Hölle (Hochheim).

The two most important varieties are Riesling with 85% andPinot Noir (Spätburgunder) with 10% of the total area. In order to enable a slow and even fermentation, the temperature of the cooling water is regulated by a modern carbon dioxide control system. This is followed by a long yeast storage. The Riesling is matured almost exclusively in stainless steel tanks. Only the top wines are aged in traditional half (600 l), (1200 l) and double piece (2400 l) barrels. The Spätburgunder wines are matured 100% in wooden barrels, almost exclusively in barrels of the same size. Over 1.9 million bottles of wine are marketed annually. The winery is a founding member of the VDP (Verband deutscher Prädikatsweingüter)