Where to buy wines of Esterházy Wein GmbH?

Set a new bookmark for the wines of Esterházy Wein GmbH. The currently tasted wines then appear on your personal Wine Reviews homepage.
Only Members can bookmark 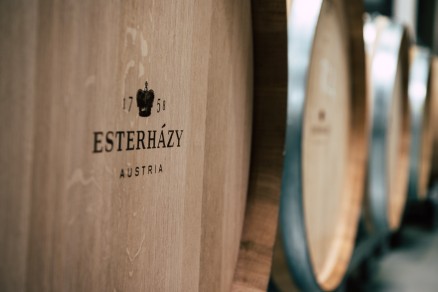 The history of this noble family, rich in tradition, goes back to the 17th century in the geographical area of today's Burganland. Two members of the family were deputies of the kings of Hungary at th...
More

The history of this noble family, rich in tradition, goes back to the 17th century in the geographical area of today's Burgenland. Two members of the family were deputies of the kings of Hungary at that time, and subsequent generations of the princely line were also party members and confidants of the House of Habsburg and held the highest offices. The history of flag-waving goes back to the Battle of Lackenbach in September 1620 between Nikolaus Count Esterházy (1583-1645) and Transylvanian and Ottoman rebels, which is commemorated by the wine of the same name from the winegrowing village of Neckenmarkt. In 1622, Count Nikolaus received a flag from Emperor Ferdinand II in gratitude for his loyalty. (1578-1637) pledged the dominions of Eisenstadt and Forchtenstein for 400,000 gulden. This marked the beginning of the rise to the most powerful family of magnates in the Hungarian crown.

Since the emperor was unable to redeem the respective pledge, Forchtenstein became Esterházy's estate after further payments in 1626 and Eisenstadt in 1647. The composer Joseph Haydn (1732-1809) entered the service of Prince Paul II Anton Esterházy de Galantha (1711-1762) in 1761 and later became Court Kapellmeister at his court. His most beautiful works were created here, and as a reward, some of them also included wine from the princely cellars. At this time Esterházy wine was exported as far as Bohemia, Moravia, Silesia and Poland [KM1]. In 1773 the sovereign Maria Theresa (1717-1780) also stayed in one of the Esterházy castles, Eszterháza (today Fertőd in Hungary), where she probably also enjoyed the wine from the castle cellars. And Johann W. von Goethe (1749-1832), on the occasion of the splendid, extravagant appearance of Prince Nicholas I. Esterházy (1714-1790) at the coronation celebrations of Joseph II. to the Roman-German king in Frankfurt am Main in 1764, let himself be carried away to the today's winged word "Esterházy's Fairy Kingdom".

Since the 17th century, the House of Esterházy has had a decisive influence on the wine culture in what was then Western Hungary and thus also on winegrowing in Burgenland. Paul V. Prince Esterházy (1901-1989), already the twelfth prince, finally had to accept the division of his estates in 1921. Only the western parts of the counties of Wieselburg, Ödenburg and Eisenburg were annexed to the new Republic of Austria as the ninth province under the name of Burgenland, of which around 66,000 hectares were owned by Esterházy. However, the larger part of the property was on Hungarian soil. He set up administrations to manage the possessions in several states - in Burgenland called Güterdirektion. After the end of the Second World War all Esterházy estates in Hungary were expropriated. In 1948 Prince Paul V had to undergo a show trial together with Cardinal Mindszenty. After serving an eight-year prison sentence, he was freed during the popular uprising in 1956. From then on he lived in Switzerland and managed his Austrian and Bavarian estates from there. His wife, Princess Melinda Esterházy, as universal heir to some 55,000 hectares of land, subsequently established foundations: Burg Forchtenstein in 1994, Lockenhaus in 1995 and Schloss Eisenstadt in 1996. 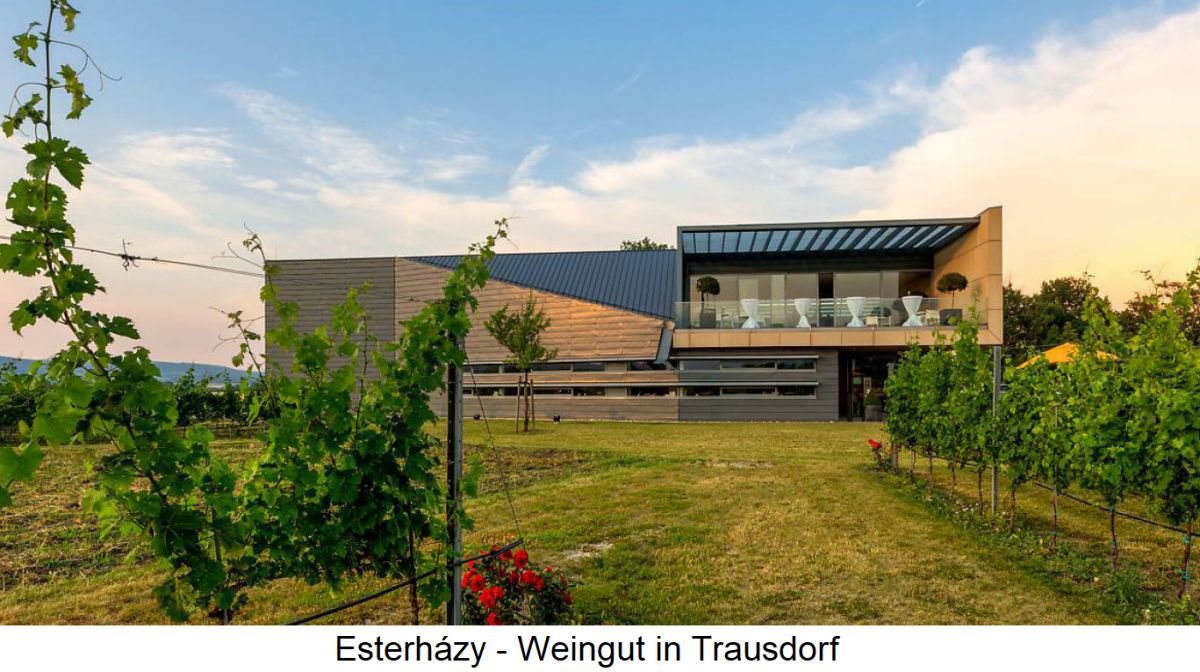 New standards were set at the latest with the arrival of Monsieur LeBon, a cellarmaster from Burgundy, who entered the service of Princes Esterházy in 1758. Modern hygiene regulations were issued and for the first time, wine was vinified according to the grape variety. Since this time, cellar books have also been kept. LeBon also brought new grape varieties to Burgenland from his homeland. In addition to the historic grape varieties Blaufränkisch, Furmint and Welschriesling, Pinot Noir was planted in Burgenland for the first time. With the acquisition of the Schildten and Schneiderteil vineyards in the village of St. Georgen, the foundation for today's top locations of the Esterházy Winery was laid.

For over 350 years, the Esterházy Winery was first housed in the Donnerskirchner Meierhof and then, from 1947, in the historic cellar rooms of the Esterházy Castle in Eisenstadt. Due to constantly growing demands, a new state-of-the-art winery was put into operation in the village of Trausdorf with an investment of six million euros in 2006. It is equipped with the most modern winemaking technology in Austria. More than 50 hectares of vineyards were newly planted according to scientific findings. For this purpose, the best clones and rootstocks were determined in countless soil and site analyses. The best vines were selected from the oldest plants, propagated and replanted(mass selection). Frank Schindler is the manager of the winery, Mate Elek is responsible for the vineyard management, and Robert Krammer is the oenologist and cellar master.

The vineyards cover 90 hectares of vineyards west of Lake Neusiedl and on the slopes of the Leithagebirge in the municipalities of Großhöflein (Föllig and Tatschler vineyards), Rust (Hochbaumgartner, Hundertpfunder, Kulm, Vogelsang), St. Georgen (nursery, Großer Feurer, Kleiner Feurer, Krainer, Krakauer, Schneiderteil) and St. Margarethen (Lama, Hartmisch). They all belong to the Burgenland DAC area Leithaberg. Two thirds of the red wine varieties Blaufränkisch (the dominant main variety), Merlot, Pinot Noir and Zweigelt, and to one third the white wine varieties Chardonnay (as the white main variety),Pinot Blanc, Sauvignon Blanc and Welschriesling are cultivated.

The wines are mostly aged in 500 and 600 litre barrels, as well as in 1,500 litre and barrique barrels. In red wine making, the most modern vinification techniques such as cryomaceration, mash heating, superimposition with inert gas, mash fermentation with immersion (pigeage) or overpumping, as well as micro-oxigenation and macro-oxigenation are possible. The grapes are processed directly in the white and red wine cellar from delivery to the finished wine. The storage room for the maturation of the red wines is equipped with a 14 m long and 3.5 m high wall of natural clay, which ensures an optimal constant temperature and humidity. An ultra-modern laboratory serves as a control centre with various control options such as refrigeration and heating technology and temperature control of the tanks.

As a logical consequence of the sustainable vineyard work, the application for organic certification for the winery's own vineyards was submitted in 2020. For the future, the primary goal is to adapt the vineyards, grape varieties and wine styles to climate change. The new planting of the Burg Roy vineyard at 380 m above sea level will be the highest vineyard on the Leithaberg. International partners contribute their experience from warmer wine-growing regions. In the cellar, a vinification with containers made of the materials concrete, clay and ceramics, or containers such as amphorae and sustainably produced wooden barrels made of local Leithaberg oak is being tested. The product range includes the lines Estoras (lat. for Esterházy, red wine and white wine cuvées), Single Cru (site wines matured in barrique) and the premium red wine cuvée "Tesoro" (treasure trove) made from Blaufränkisch and Merlot. The labels show the Order of the Golden Fleece, which many Esterházy princes wore (Estoras), as well as historical personalities from the Esterházy ancestral gallery (Single Cru).

Around 750,000 bottles of wine are produced annually. It also produces fine spirits(brandy, marc, fruit and fruit), liqueurs and bottle-fermented sparkling wines. Worth mentioning is the "Weinmuseum Burgenland" in the historic cellar vaults of Esterházy Castle. Here over 700 objects from antiquity to the present day provide a historical and cultural overview of winegrowing in Burgenland. Focal points or thematic complexes are drinking culture, cellar technology, vineyard and wine trade. The Etyeki Kuria winery is operated in Hungary.

Esterházy Wein GmbH Region: Leithaberg Austria Burgenland
One of the best producers of the region
wein.plus Business Premium Member
In this section you will find
currently 146,181 Wines and 23,070 Producers, including 2,384 classified producers.
Rating system Their sources in Wine Guide Tasting samples
Bookmark