Set a new bookmark for the wines of Eichenwald Weine. The currently tasted wines then appear on your personal Wine Reviews homepage.
Only Members can bookmark

About Producer Eichenwald Weine, Horitschon is a premium member of wein.plus 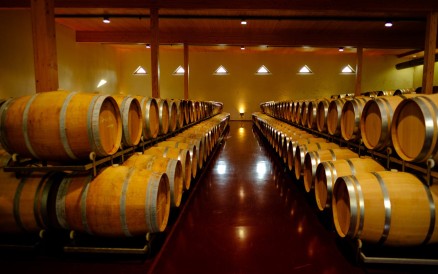 The winegrowers' cooperative is located in the municipality of Horitschon in the Austrian DAC area of Mittelburgenland. It was founded in 1962 under the former name "Winzergenossenschaft Horitschon". Sales manager Hans Dowitsch is responsible for sales, export and marketing. The cellar master Ing. Gregor Wolf is responsible for all matters concerning vinification. About 500 hectares of vineyards are cultivated by the 450 members. Mainly the traditional Austrian red wine varieties Blaufränkisch (70%) and Zweigelt (24%), as well as Cabernet Sauvignon and Merlot are processed. The delivery of the grapes is computer-controlled and separated according to variety. The optimum harvest date is determined by the cellar master depending on weather, must weight and other criteria, and varies from vineyard to vineyard

The ripening cellar, which went into operation in August 2004, was planned and built by the Austrian star architect Wilhelm Holzbauer. It allows optimal maturing conditions around the barrique and wooden barrel maturation as well as a perfect organisation of the bottling. The large product range includes several red wines Mittelburgenland DAC and Mittelburgenland DAC Reserve (Blaufränkisch) from the Dürrau, Gfanger and Hochäcker vineyards, as well as the red wine cuvée Royal (Blaufränkisch, Cabernet Sauvignon) and a pure Merlot. The wines are exported to Germany, Holland, Poland, China and the United States of America, among others.
Eichenwald Weine Region: Mittelburgenland Austria Burgenland
One of the best producers of the region
wein.plus Business Premium Member
In this section you will find
currently 154,029 Wines and 24,082 Producers, including 2,416 classified producers.
Rating system Their sources in Wine Guide Tasting samples Editorial schedule
Bookmark