Set a new bookmark for the wines of Donnafugata. The currently tasted wines then appear on your personal Wine Reviews homepage.
Only Members can bookmark

Where to buy wines of Donnafugata?

About Producer Donnafugata, Marsala is a premium member of wein.plus 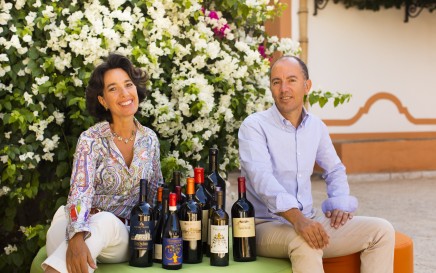 The winery's headquarters are in the port town of Marsala in the province of Trapani on the west coast of Sizilien. The origins date back to 1851, when the Rallo family entered the winegrowing busines...
More

The winery's headquarters are in the port town of Marsala in the province of Trapani on the west coast of Sicily. The origins date back to 1851, when the Rallo family entered the winegrowing business. The current business was founded in 1983 by the fourth generation of Giacomo and Gabriella Rallo. It was in the vineyards of the Contessa Entellina area that the writer Giuseppe Tomasi di Lampedusa (1896-1957) had some excerpts of his famous novel "Il Gattopardo" (The Leopard) set. It then became famous through the film version of the material with Hollywood star Burt Lancaster in the leading role. The name was given by Queen Maria Carolina of Habsburg-Lorraine (Donnafugata = fleeing woman), who fled from Naples to escape the Napoleonic army. The vineyard emblem is a woman's head representing the queen with waving long hair. This motif can also be found on the labels designed by Gabriella Rallo (see also under artist label).

There are several operating sites or wineries. The vineyards cover a total of 405 hectares of vines. Of these, 283 hectares are located in the Contessa Entellina area at an altitude of 300 to 600 metres above sea level, largely in the municipalities of Contessa Entellina, Sambuca di Sicilia and Santa Margherita Belìce. The other areas are on the island of Pantelleria (68 ha), in the Vittoria area (36 ha) and in the Etna area (18 ha). The white wine varieties cultivated are Chardonnay, Sauvignon Blanc, Viognier, Petit Manseng, Müller-Thurgau, Ansonica (Inzolia), Lucido (Catarratto Bianco), Damaschino, Fiano, Carricante, Grillo, Grecanico Bianco (Garganega) and Zibibbo (Muscat d'Alexandrie), as well as the red wine varieties Cabernet Sauvignon, Merlot, Petit Verdot, Nero d'Avola, Perricone, Syrah, Tannat, Frappato and Nerello Mascalese. The harvest of the Chardonnay grapes for the DOC white wine Sicilia "La Fuga" is done at night under spotlight to preserve the aroma through the cool temperature. This method is said to have been practised by the Elimi people as early as the 4th century BC. Some of the Zibibo grapes grown on Pantelleria are ungrafted over 100 years old.

In the Contessa Entellina area, an experimental vineyard was planted on half a hectare in collaboration with the region of Sicily, with 19 different autochthonous varieties of various clones. These are grape varieties that are widespread in Sicily, such as Nero d'Avola, Catarratto Bianco and Ansonica, but also very rare ones that are threatened with extinction, such as Alzano, Nocera, Vitrarolo and others. In cooperation with farms in different areas of Sicily, the grape varieties are tested and by means of microvinification it is determined which varieties produce the best oenological results in which areas.

The environmentally friendly cultivation is carried out according to the rules of GAP (Good Agriculture Practice) and integrated pest management with the renunciation of herbicides and chemical fertilisers with green man uring instead. A reduced use of plant protection products is possible by monitoring climatic parameters (precipitation, temperature, humidity, etc.) and controlling insect occurrence (meal moth) through the use of pheromones. A quality-enhancing measure is yield reduction through thinning. An important contribution to sustainability is made by the production of clean energy from renewable sources with the photovoltaic systems, which allow a reduction of CO2 emissions. The Donnafugata farm is certified according to the requirements of the environmental management system EMAS developed by the EU.

Donnafugata Region: Italy Sicily
One of the best producers of the country
wein.plus Business Premium Member
In this section you will find
currently 154,643 Wines and 24,125 Producers, including 2,472 classified producers.
Rating system Their sources in Wine Guide Tasting samples Editorial schedule
Bookmark