Set a new bookmark for the wines of Château d'Yquem. The currently tasted wines then appear on your personal Wine Reviews homepage.
Only Members can bookmark

World famous winery in the Sauternes area (Graves, Bordeaux). In the Bordeaux-Klassifizierung, the Château was the only one to receive the "Premieur Cru Classé Supérieur" label, making it the highest...
More

World famous winery in the Sauternes area (Graves, Bordeaux). In the 1855 Bordeaux Classification, the Château was the only one to receive the "Premieur Cru Classé Supérieur" label, making it the highest classified vineyard in the Bordelais. The château towers above the surrounding vineyards of Sauternes on a 75-metre-high hill. In 1993 the 400th anniversary was celebrated. During the English rule in Bordeaux from 1152 to 1453, it was owned by the English crown and then belonged to the French king Charles VII. (1403-1461). A Jacques de Sauvage leased it in 1593 (which is considered to be the year of its foundation) and it was bought by his descendants in 1711. In 1785, the Comte Louis-Amédée de Lur-Saluces married the young François-Josephine, the last heiress of the Sauvage d'Yquem family, who brought in the castle and vineyard as a dowry (hence the name). For the next two hundred years it remained in family ownership and was converted into a public limited company in the 1990s. Since 1999, 64% of the shares are owned by the LVMH Group. Comte Alexandre de Lur-Saluces, as the last descendant, still owns shares and was also the general manager for many years. In 2004, a separation occurred due to differences with the owner, and Pierre Lurton became his successor.

Thomas Jefferson (1743-1826), then US ambassador to France and later US president, visited the estate in 1787 and after a tasting had 30 bottles sent to America to his friend George Washington (1732-1799). The aristocratic family developed the very elaborate and costly winemaking process, no other estate uses so much effort for this. There are various versions of who was the first in Sauternes to produce a noble sweet wine. Jefferson certainly did not know the dessert wine in its present form, but it was still produced in the "Y" style at that time (see below). Legend has it that a descendant of the family returned late from a trip to Russia in 1847 and found only noble rotten grapes shrivelled by botrytis. He therefore ordered a "late harvest". Another variant says that the then German owner of the Château La Tour Blanche had already experimented with the production of noble sweet wine before. The first vintage of the d'Yquem, as we know it today, was in any case the 1847. The Russian Grand Duke Konstantin Nikolayevich (1827-1892) tasted the wine in 1859 and brought it to Russia, where it became the absolute fashionable drink under "Yquem". 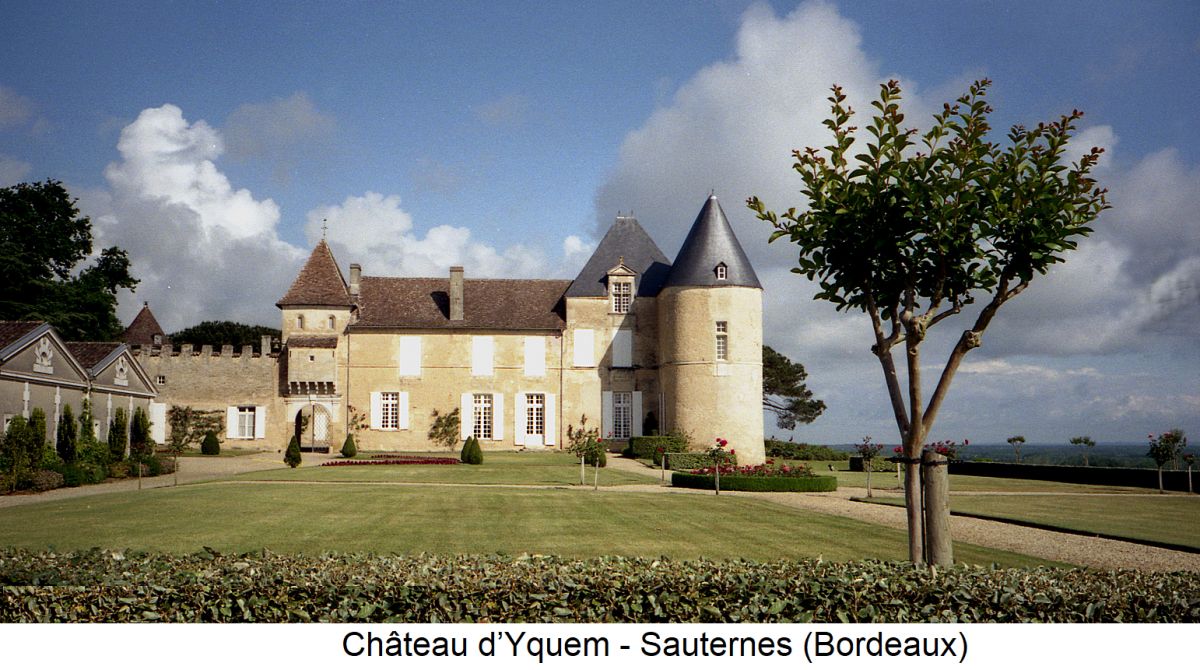 The current vineyard area of 106 hectares on sandy gravel and clay soil is 80% Sémillon and 20% Sauvignon Blanc. The quality criteria are extremely strict, so there was no production at all in 1964, 1972, 1974 and 1992. The production is extremely complex. Every year about three hectares of vines are cleared and only replanted after three years of fallow land. No pesticides are used and horse manure is only applied every three to four years. In summer, the leaves of the grape zone are removed, thus exposing the berries to maximum sunlight. The grape harvest usually begins only in mid-October and often continues into December due to the laborious practice. The grapes are carefully harvested by hand in at least six to eleven tris (passages) by about 120 harvest workers. In 1972 the 11 Tris were spread over 71 days, but there was still no Château d'Yquem. Often only a few noble rotten berries are selected from a grape. The harvest is limited to a maximum of 9 hl/ha and yields only a fraction of a normal white wine harvest. One vine yields only one glass of wine, which is about 1,000 bottles per hectare. Only about 80,000 bottles of sweet Château d'Yquem (and 20,000 of dry white wine "Y") are produced annually.

The daily harvest quantities (Journée) are fermented individually. The mash is pressed three times and the must of these three operations is blended. Fermentation takes place at 20 °Celsius and lasts two to six weeks. Afterwards the wine contains 13 to 14% vol alcohol and 80 to 120 g/l residual sugar. It is put into 100% new barrique barrels without clarification, which are only filled to two thirds. Every three months, the wine is raked and decanted, but the barrels are never completely bungled. The total shrinkage is 20%, therefore refilling takes place every two weeks. There is a repeated fining (basically without protein), but no filtration. After a maturation of at least three and a half to four years, the assemblage takes place, whereby as a rule 80% Sémillon and 20% Sauvignon Blanc are used. Each individual barrel is checked and, depending on the vintage quality, a part (at least 10%) is separated out and sold in the barrel. The rich sweet taste of the wine is incomparable, it has an intense scent of honey and its colour changes over the years to pale gold.

A Château d'Yquem only reaches its maturity for consumption after six to seven years at the earliest, but the really great vintages last for almost eternity. One of the most famous vintages is the 1811 vintage, which was also called "Napoleon wine" (or "comet wine") because the French emperor Napoleon (1769-1821) had reached the peak of his fame at that time. In July 2011 the Antique Wine Company in London sold a bottle of this vintage for 75,000 British pounds (about € 85,000) to the famous former sommelier Christian Vanneque. Vanneque had been present at the legendary Paris Wine Tasting in 1976. The authenticity of the bottle was confirmed by the château itself after a close examination of the bottle label and capsule. With this high selling price this wine is the most expensive white wine in the world.