Set a new bookmark for the wines of Ca' del Bosco. The currently tasted wines then appear on your personal Wine Reviews homepage.
Only Members can bookmark

Where to buy wines of Ca' del Bosco?

About Producer Ca' del Bosco, Erbusco (BS) is a premium member of wein.plus

The winery is located in the municipality of Erbusco, west of Brescia in the province of the same name in the east of the Italian region of Lombardei. Its origins go back to the purchase of a plot of...
More

The winery is located in the municipality of Erbusco, west of Brescia in the province of the same name in the east of the Italian region of Lombardy. Its origins go back to the purchase of a plot of land by Annamaria Clementi Zanella in the mid-1960s, which was surrounded by a dense forest of chestnut trees. In 1968, the first vines were planted by her son Maurizio Zanella. The latter studied in France at the University of Enology in Bordeaux and at the Station Oenologique de Bourgogne in Beaune. The French oenologist Émile Peynaud (1912-2004) was consulted when the vineyards were planted. Zanella enlisted the help of cellar master André Dubois from the Champagne house Moët et Chandon and Brian Larky from the University of California. Maurizio Zanella, together with Angelo Gaja and Giacomo Bologna, was instrumental in initiating the renaissance of Italian viticulture (Rinascimento enologico italiano) from the early 1980s.

An ultra-modern winery of superlatives was built in terms of architecture and technical infrastructure. Half of the small mountain on which the estate is situated was excavated and a star-shaped 20,000 m² cellar was built. Its centrepiece is a seven-metre-high room resembling a cathedral. Thanks to its undulating profile, the building follows the slope of the vineyard. Above the cellar there is a helicopter landing pad. The catacombs, built deep into the earth, are ideal for the extremely long storage of the wines in wooden barrels, barriques and bottles because of the natural constant temperature. Stefano Capelliu is the oenologist in charge today. 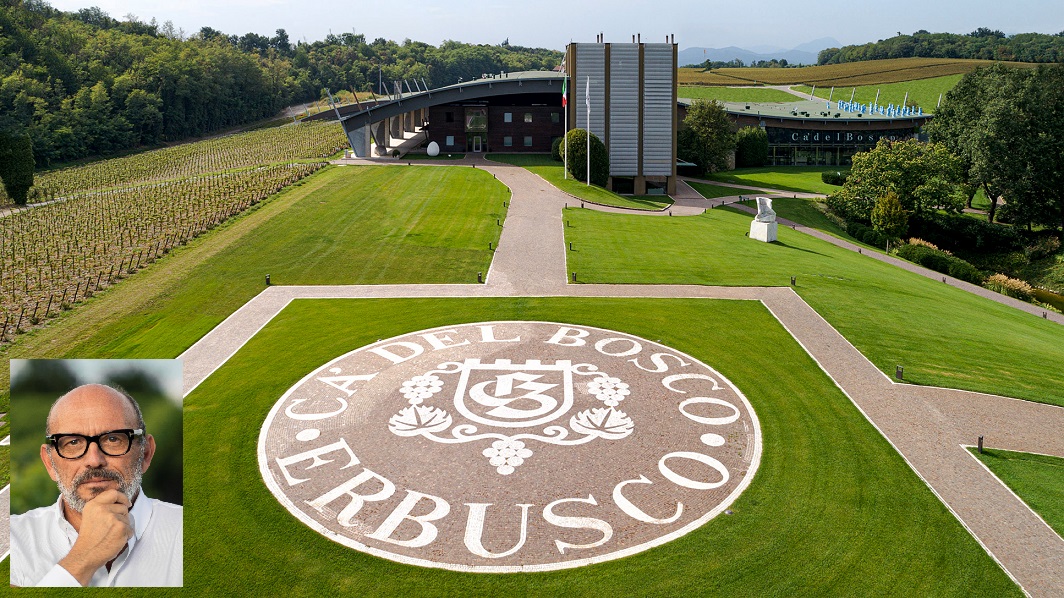 The vineyards cover around 250 hectares of vines planted with the red wine varieties Cabernet Sauvignon, Merlot, Pinot Nero (Pinot Noir), Carmenère and Cabernet Franc, as well as the white wine varieties Chardonnay and Pinot Bianco (Pinot Blanc). Since 2017, the vineyards have been cultivated according to the rules of organic viticulture. Special techniques are used to emphasise the typicality and full flavour of the grapes. The individual batches of the grape harvest, which is always done by hand, are carefully selected and cleaned using a special system. Ca' del Bosco has developed a special disgorging and bottling system in the absence of oxygen to prevent oxidative shocks.

The flagship of the house is the DOCG sparkling wine Franciacorta Riserva "Anna Maria Clementi", whose base wines are pressed in a hand-operated, wooden press. It is blended from Chardonnay 75%, Pinot Bianco 10% and Pinot Nero 15%, aged for 6 months in small oak barrels and 8 years in bottle on its lees, and is corked without dosage. Other wines include the DOCG sparkling wine "Prestige Edizione" (Chardonnay 81.5%, Pinot Bianco 1.5%, Pinot Nero 17%) extra brut, which is aged for seven months in barrels and two years in bottle, and the IGT red wine Sebino Rosso (Cabernet Sauvignon 50%, Merlot 25%, Cabernet Franc 25%), which is aged for 13 months in barrels and one year in bottle.

Ca' del Bosco Region: Italy Lombardy
One of the best producers of the country
wein.plus Business Premium Member
In this section you will find
currently 153,882 Wines and 24,050 Producers, including 2,416 classified producers.
Rating system Their sources in Wine Guide Tasting samples Editorial schedule
Bookmark